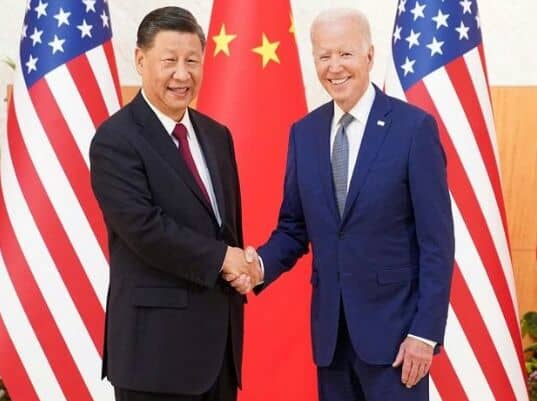 In the midst of rising economic and security concerns between the two giants as they compete for global influence, President Joe Biden and Chinese President Xi Jinping began their first face-to-face encounter on Monday since the US president took office nearly two years ago.

Both men came into the eagerly awaited conference with their domestic political status strengthened. Democrats successfully retained control of the U.S. Senate, with a chance to increase their numbers by one in a runoff election in Georgia next month. In contrast, Xi received an unprecedented third five-year term from the Communist Party’s national congress in October.
Biden told reporters on Sunday in Phnom Penh, Cambodia, where he took part in a conference of Southeast Asian nations before departing for Indonesia, “We have very little misunderstanding.” We simply need to identify the red lines and determine what matters most to each of us over the course of the next two years.

He has changed circumstances at home, to state the obvious, Biden continued. Regarding his own circumstance, the president remarked, “I know I’m coming in stronger.”
Aides in the White House have frequently tried to dispel any idea of tension between the two countries and have underlined their belief that they can cooperate on issues like climate change and health security.
But as disparities in economics, trade, human rights, and security have surfaced under successive American administrations, relations between the U.S. and China have become more tense.

At a five-star resort hotel in Indonesia where they are both attending the G20 summit of major economies, Xi and Biden shook hands to greet one another. According to US sources, Biden wants to create a foundation for ties between leaders and countries so that they may identify possible areas of collaboration and prevent mistakes between the nuclear powers on those areas where they differ.

As president, Biden has repeatedly criticised China for its violations of human rights against the Uyghur people and other ethnic minorities, as well as for crackdowns on Hong Kong democracy activists, coercive trade practises, military provocations against Taiwan’s self-government, and disagreements over how Russia should proceed with its conflict with Ukraine. Chinese leaders have mostly avoided publicly criticising Russia’s conflict, despite Beijing avoiding direct backing like arming the Russians.
One of the most difficult problems between Washington and Beijing now is Taiwan. Biden has stated numerous times during his presidency that in the event of a Beijing-led invasion, the United States would defend the island that China has its eyes on for potential unification.

Furthermore, despite the fact that the two men have spoken on the phone or via video chat five times while Biden has been president, White House officials claim that those interactions are insufficient to allow Biden to assess Xi in person. Because lower-ranking Chinese officials have been unable or unwilling to speak for their leader, this task has become even more crucial since Xi tightened his hold on authority through the party congress.

The U.S. president has emphasized that he knows Xi well and he wants to use this in-person meeting to better understand the two men stand.

The White House aides claimed that several world leaders approached Biden while he was in Cambodia meeting with Asian allies to reassure them of the U.S. commitment to the region in the face of China’s assertive actions and to tell him the results of the midterm elections were a victory for democracy. This provided some support for the president’s position on the international stage.